Current head and body protective gear provide excellent protection against fatal injuries, but they use inextensible straps that limit voluntary motion and aren’t able to control the acceleration on the driver’s head and body.

Building the Decelerate Straps into protective gear provides Dynamic Protection to the users head and neck. The Shear Thickening Fluid formula can be tailored over a wide range of forces and transition speeds. The current formula provides the benefits below:

Testing was conducted at the Air Force Research Lab shows a pilot during a 15g impulse that simulates a pilot ejection from the plane without Decelerate Straps in the video shown below.

The same test was conducted while implementing the Dilatant Decelerate Straps on the Pilot. The Decelerate Straps would be attached to a retrofitted bar that goes across the back of the helmet. The bar is attached at the two screw points on the side of each helmet. The second connection would be the D hooks on the Pilot harness. Implementing the straps would not restrict the Pilot’s standard head motion as they are able to stretch during low resistance.

Test results show an approximately 35% lower force was examined in the X direction and 50% lower force in the Z direction. This is a significant improvement that a standard helmet wouldn’t be able to provide. 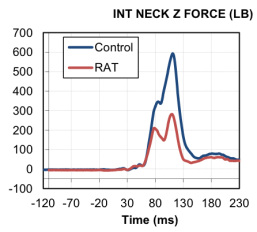 To implement the Decelerate Straps into a head and neck restraint to reduce the acceleration the driver incurs during a crash or change in acceleration. Current head restraints are current used to reduce the likelihood of fatal head and/or neck injuries, such as a basilar skull fracture, in the event of an automotive crash. The Decelerate straps would replace the current woven nylon strap that wraps around the back of a head and neck restraint. The tether would provide two connection points to the helmet on each side and properly wrap around the backside of the restraint.

Utilizing the Decelerate Straps to reduce the lateral acceleration a driver will face. This will be a completely unique product on the market. This product will ensure that the drivers head is controlled laterally. A driver can see high forces during normal race conditions as well as crashes. Controlling this motion would provide added protection to the brain. The current development plan for the Automotive Decelerate Lateral Restraint System is to split the product into two parts, the Decelerate Straps and the Harness System. This product will help drivers keep their head steady during lateral high G force events. 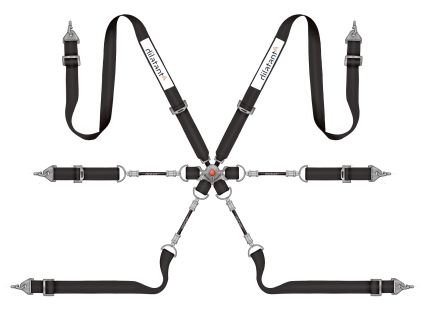